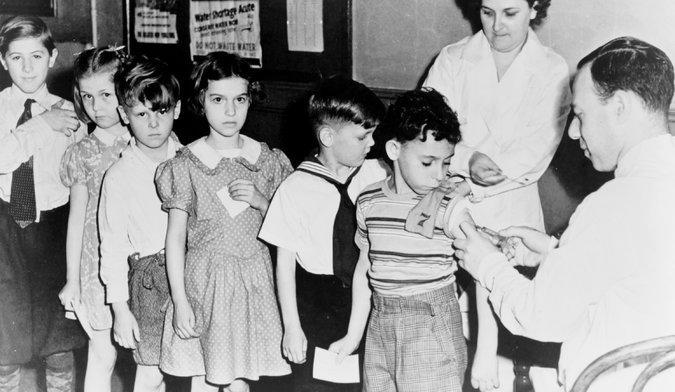 Last month The Hollywood Reporter published an illuminating investigation on immunization trends in Los Angeles County, which revealed that vaccination rates on the city’s wealthy west side, in neighborhoods like Beverly Hills and Santa Monica, had plummeted, as incidents of whooping cough surged. The piece had the virtue of offering New Yorkers yet another opportunity to feel smugly superior to their counterparts in L.A., because of course here on the East Coast we like our science to come from scientists, not from former Playboy models and people who feel entitled to pontificate about public health because they drink kefir.

In an interview with NPR last month about her new book, “On Immunity: An Inoculation,” the author Eula Biss presented the idea that vaccinating your children on schedule was now seen as “an extreme position.”

New York State and city have strict immunization requirements, which have been further strengthened over the past two years. It is not possible here, as it is in California, to obtain a philosophically based exemption from those rules for your child. In January, the city health department decreed that all enrolled children from 6 months old through age 5, whether attending public or private schools, had to receive a flu shot before Dec. 31. Parents, though, can recuse their children from vaccination protocols with religious exemptions, which are relatively uncomplicated to obtain.

And certainly some exploitation of that loophole is exercised. Amanda Uhry, who runs a consultancy called Manhattan Private School Advisors, which, as its name suggests, helps parents through the private-school application process, said she recently turned down a half-dozen clients when she discovered that they were opposed to vaccination. For a long while she had never inquired about the issue, but a few years ago, a child she was working with missed his kindergarten interview because of whooping cough, which left her stunned.

“I thought, Whooping cough? Who gets whooping cough anymore?” she said. The episode compelled her to start asking about vaccination early on. “No application to any school asks, ‘Are you an anti-vaxxer?’ but these schools want to keep the anti-vaxxers out.” So, she said, “I ask people and if they get into the whole anti-vaxxer deal, I say, ‘Fine, we can’t work with you.’ ” You’re not, as she put it, “going to Horace Mann like this.”

There is enough appeal in anti-vaccination thinking among members of the affluent class that certain pediatricians in the city, as they have elsewhere around the country, have made it a policy in recent years to refuse to see children whose parents won’t have them immunized. A few years ago Pediatric Associates of NYC, which has branches in Murray Hill in Manhattan and Prospect Heights in Brooklyn, chose this course, David Horwitz, a partner in the practice told me, in large part because it simply became untenable to have unvaccinated children sitting in waiting rooms.

Within the American Academy of Pediatrics there has been a rancorous debate about whether doctors should see un-immunized patients, and the academy’s position has leaned toward an inclusive approach. But, Dr. Horwitz said, “we were spending a lot of time talking to parents who weren’t immunizing and who were terribly ill informed. A lot of people would continue to come back and come back and come back and we were spending so much time talking about vaccinations that we weren’t dealing with other things,” he said.

“We ultimately felt ethically uncomfortable seeing people who don’t vaccinate. We are advocates for children, not their parents.”

Among mothers and fathers coming in for an infant’s two-week visit, about 10 percent express opposition to vaccination, Barney Softness, a prominent Upper West Side pediatrician, told me, speaking of his practice. Dr. Softness works with patients to persuade them to immunize. Often he is successful, he told me, but often, “they give me lip service and then delay.”

Because so many New Yorkers are committed more to ambivalence than absolutism, and ultimately to their own neuroses above all else, the current moment of viral fear — the rise of Ebola and national reports of the spread of enterovirus 68 — is actually a fortuitous one for the project of shifting the opinions of deniers, even though there are no vaccines for those illnesses. A hepatitis-A scare on the Upper West Side last year led to a rush of patients coming in for various vaccines, Dr. Softness told me. “Nothing makes people want to get vaccinated more than reports of two cases of something in a ZIP code.”

Laura Popper, who has had a pediatric practice on the Upper East Side since the late 1970s, has never accepted families who refuse to vaccinate their children as patients. As a resident at Columbia nearly 40 years ago, she witnessed as two little girls who were sisters died of diphtheria after a relative visiting from the Dominican Republic turned out to be a carrier. The girls weren’t immunized. “I said to myself then, this will never again happen under my watch,” Dr. Popper said.

“My feeling is that it will take something like that on a very large scale to get upper-middle-class people to realize that this is serious stuff,” she said, even more so than terrorism or other global concerns. “You look around and most of the deaths in the world are from contagious diseases. Not ISIS.”

Original article by Ginia Bellafante of The New York Times